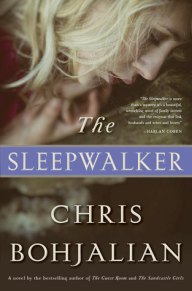 Chris Bohjalian is one of my favorite authors, and I believe he is one of our greatest storytellers.  I am always excited when he publishes something new.  This book, his latest, is marketed as a mystery thriller.  But Bohjalian is such a gifted writer I prefer to say that this is a literary thriller (his novels always improve my vocabulary even though I need to stop reading to look up the meaning of a word). This tale reminds me of an old foreign film, meaning that the pace is slow (unlike most thrillers), but worth the wait.   Our location is a small Vermont town.  I love when he writes stories located in rural Vermont, since I live there in the summers and get a kick out of local references.  The book begins in early 2000.  Remember our Y2K fear when we were all waiting for computers to crash?   Or when there were no smart phones or social media?  This is important to the plot, as the story is about a missing woman, and how much harder it was just 17 years ago to search for a missing person.

In a family of four, father, mother, and their 21-year-old and 12-year-old daughters–it is the mother who goes missing.  The mother also happens to be a sleepwalker, of which the whole town is aware.  The mother and the rest of the family are ashamed of her public sleepwalking.  The tale raises provocative questions about what goes on in our minds during the eerie period when we are not really sleeping and not really awake.  I learned much about sleep disorders, and our unconscious sexual state.  I actually googled the phenomenon to make sure Bohjalian wasn’t making them seem more bizarre than they actually are. He didn’t.

The 21-year old daughter is the narrator throughout the story.      She is an amateur magician.  It took me awhile to understand that her magic has a connection to her mom’s magical state of sleepwalking.  Once her mom goes missing, she does not return to college.  Instead she stays home and takes on the role of housewife and mother.  I found this to be unnerving.  The author chooses to leave the reader wondering if she was being a supportive family member, if she was in a depressed state, or if her new responsibilities where making her feel delusional.    I felt it was a bit of all three.  Again, I thought about her job as an amateur magician, and the mysterious and delusions of magic.

I was a tad disappointed when the elder daughter begins a probably unethical relationship with a detective on the case.  And as the family secrets are slowly revealed, I found it hard to believe that she would not end the relationship with him (if I explain more here it will be a spoiler).  But I tried to remember that this character was only 21-years-old, at an age when most of us are not thinking clearly about love affairs.  Still, I didn’t think the affair was needed in the plot.  There were so many suspicious persons and reasons that may have been involved in wanting her mother to disappear or be killed.  I felt the romance made this superior novel a bit more like a classic detective story yarn.  But maybe that is just me as I do not care for the genre of contemporary romance.  All in all, the author gives us another knockout story with Hitchcockian suspense.  The ending had me going back to see if I could find the clues that I missed.

Find all my reviews at https://www.goodreads.com/review/list/4793025-martie-nees-record?shelf=read