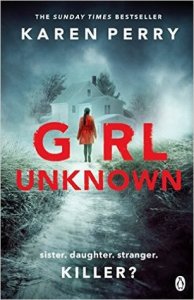 This book is marketed as general fiction, but I feel it is a psychological thriller, as it appears to be with all books that have the word “girl” in the title.  The reader will meet a family consisting of husband, wife and two children, a 15-year-old boy and an 11-year-old girl.  I liked the fact that the author did not present this Irish family as perfect.  Both parents have secrets from one another.  They certainly have their troubles, but the parents work hard on making their marriage work.   They do love one another and want the best for their children.  The father is a college professor.   In his first-year class, a 19-year-old female student informs him that he is her father from a relationship he had before he married.  The reader already knows that this girl’s mother is the true love of his life.

He accepts the girl into his world right away.  He is rather naïve in thinking he can easily integrate this daughter into his established family.  As the reader expects, almost immediately problems arise.  The novel is narrated by the husband and wife.  As the title indicates, this girl is an unknown variable in their lives.  She has more of her own secrets than this family ever had.  She seems to take pleasure in causing conflict, usually ending with the females in the family seeing her as a narcissistic person enjoying the drama she creates, while the males feel she is a troubled person who needs their support.  I imagine that this book is advertised as general fiction since it reads like a family drama and a character study.  Grant you, an easy character study that is a quick read: a beach book that will probably become a movie.

Half-way through the tale, due to the stressors, all family members begin to crumble.   Both parents have major setbacks in their careers as well as in their personal lives.  The son is acting out in school, while the 11-year-old daughter has become withdrawn.   But it is during a family vacation in France that all hell breaks loose.   I would ruin the story for you if I explain why.  The previous twists in the book were predictable, easy to find since the family dynamics became rather warped.  However, the twist on the last page of the novel did surprise me.   It actually left me wanting to know more, wondering what will happen now, which tells me that “Unknown” is a decent read after all.