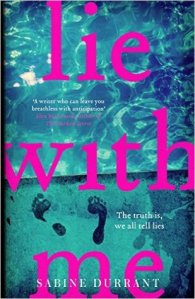 Have you ever told a lie? Most of us have. The question in this psychological thriller is guessing who is telling the truth and who is lying. I don’t think I just wrote a spoiler because the reader will wonder this for him/herself relatively early in the novel. This is an unusual thriller. I would even venture to say that this is a work of literary fiction. Usually, mysteries and psychological thrillers are written in a rapid pace. “Lie With Me” reads slow. Since I enjoy the slower pace of foreign movies, the novel is a good fit for me. Think the 1994 French film, “Léon: The Professional.”

Paul is a character in this book who is a major loser. Jobless at age 40, he moves back home to live with his mom. Paul tells so many lies he confuses them. He can forget what is true and what is false. He has written one novel in his youth and twenty years later he is still trying to hang onto his 15-minutes of fame. He meets an old college friend who is ultra-rich. Through him, Paul meets Alice, who is also ultra-rich and another member of the 1%. Paul is fascinated with them and their lifestyles. He tells some whopper lies to Alice, becomes her reluctant beau and worms his way into their annual Greek holiday. He seems to have the notion that somehow they will transform him into a good person living the good life, (as Leon the character played by actor, Jean Reno, hoped the child would transform him.) The reader is aware that he wants to be Cinderella. We also know that Paul is a pathological liar—but is he a murderer? The author, Sabine Durrant, gives deliberately confusing hints to the reader when she goes back and forth in time.

Durrant has written a different kind of beach read, one that begins and ends with a lie. The novel’s development comes from the characters rather than the plot, which I enjoy. My only issue is that about three quarters through, I did figure out the truth. There was (at least for me) no big ending twist. It was the author’s writing style that kept my interest to want to finish.