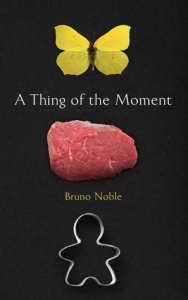 Not many male authors can write young female narratives as well as this author.  Written as an interwoven narrative, the reader will follow three female characters who suffer from sexual and self-worth issues.  We meet them as children and watch them grow into teenagers.   In the second half of the book they are women in their late twenties.  Finally, there is a quick glimpse of their middle-aged years.   As children: one girl is sexually abused by her father.  Another is emotionally abused by her rejecting parents.  The third, and possibly the most interesting child, has supportive parents who encourage her to spread her wings.  Still, like the other two, she feels alone.  In the first half of the book, Noble manages to write their sad stories in an intellectual and yet still stirring novel—Tear-jerking but not melodramatic.

He uses butterflies as a constant metaphor throughout the novel.  The sexually abusive father is a butterfly collector, reminiscent of the early 1960s creepy novel and movie, “The Collector.”  His daughter can leave her body.  This phenomenon is a well-documented coping mechanism for abused children.  Her experiences are captured realistically through the eyes of a confused child.   Noble brings her alive by exposing her naïve thoughts and childhood vulnerability.  The second girl’s parents, who literally do not want her, seem just as evil as the sexually abusive father.  It is hinted that she may not be the biological child to her father.  He adores his other children.   Her narrative is written a tad too much like “Cinderella.”  The author manages to salvage the fairytale-like feeling when placing the attention onto her mother.  She is a complex character who ignores her maternal guilt by focusing on becoming a well-groomed, successful businesswoman.  The loving and self-sacrificing parents of the third girl put all their efforts into encouraging her to rise above their working poor status.  They want her to be her own person, and to one day leave their misogynistic country.  It is interesting to read how these parents completely miss that their child has trouble making emotional attachments.  This causes the girl to be insecure.   She learns to cope with her insecurity by believing she is different because she is special. Noble does a good job making the reader wonder if this protagonist is mentally off, or just unappreciative—Spoiled by the attention.

Once women, the novel does not read nearly as well as when they were girls.  Their adult lives’ read like an add-on to the real book.   Nothing flows smoothly.  Often written in a free-floating prose, which constantly begs the reader to question; humankind, sexuality, and how we connect to the universe.  Unless you are interested in being part of a philosophy class, this is skimming material.  Then there are endless scenes of thinly veiled references to cannibalism: butcher shops, meat factories, biting in sex, and so on and so forth.  The metaphor of eating another’s flesh, or soul, works brilliantly when written through the eyes of an innocent child trying to make sense of their abuse.  But as adult women, the theme is not needed and becomes tiring.  The author brings in a male character.  He has a relationship with all three women.  Yet, somehow he doesn’t feel like a main character, but another add-on.  And then there is the possible fair (?) ending.  (Spoiler)  The two abused girls become well-adjusted middle-aged women.  The girl whose parents lavished love onto her is a non-likable narcissistic woman.  She demonstrates borderline personality traits (one who enjoys sabotaging others.)  Why?  It feels like a dangerous over-simplification, almost like he’s saying you need to traumatize a girl or she’ll turn out to be insufferable.   This particular character got the short end of the stick.  The latter part of the novel does have redeeming moments.  Noble succeeds in his quest to get the reader to wonder how their own body, mind, and soul are connected.  Still, one is left with the feeling that they have read two different books.  One might prefer one to the other but as a whole, they do not fit.  Is there a way to recommend half of a book?

I received this already-published book at no cost in exchange for an honest review from the publisher through BookSirens.

5 thoughts on ““A Thing Of The Moment” by Bruno Noble”