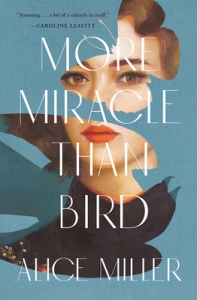 This book’s unusual title is from a line in the poem, “Sailing to Byzantium,” by William Butler Yeats. The novel’s setting is in England on the eve of WWI. The book is marketed for fans (and I am one) of Paula McLain’s female fictional memoir, “The Paris Wife.” I have enjoyed other novels written in this manner, such as “The Aviator’s Wife” by Melanie Benjamin. In both novels, the author blurs the line between a biography and fiction, focusing on the wives of the famous men they married. The catch is that the reader gets to learn about the famous men through the eyes of the forgotten women. “Miracle” is another novel reimagining a romantic relationship through the wife’s eyes. This time between Georgie Hyde-Lees who was married to the great Irish poet, W.B. Yeats. As it says in the prologue, written by biographer, Richard Ellmann, “Had Yeats died instead of marrying, he would have been remembered as a remarkable minor poet…who except in a handful of poems, did not have much to say.” We get it, ‘behind every great man…’—yada-yada.

What makes this one different and a bit odd is that the midlife poet introduces the much younger 21-year-old Hyde-Lees to a mysterious occult that is obsessed with the afterlife. ‘The Order’ is the name of the secret society. (I googled; it’s all true). Fortune tellers, séances and the weirdly hooded, robe-wearing Order members are a large chunk of the plot. I was not expecting hocus pocus in this book. It totally took me by surprise, leaving me with mixed feelings. I enjoyed learning how eccentric Yeats was, but I was not interested in the couple’s occult shenanigans. However, the author does a good job of keeping the pace racing. At one point, Georgie finds herself in a closed coffin as part of an initiation.

Miller has a nice dichotomy going on. By day, Georgie is working in a hospital for injured soldiers, one of whom is smitten with her (not sure if the soldier is real or fictional), and by night, she is with her poet, his famous pals not to mention attending occult meetings. The love affair and marriage are a bit duller than found in “The Aviator’s” and “The Paris,” probably because the author paints W.B. as not as taken with his wife as she is with him. His big love affair that went on for decades was with a married woman pre-Georgie (I googled. Again, true). This is a well-researched and interesting tale. This reviewer never knew how much she didn’t know about the acclaimed poet. Although I would have enjoyed reading a bit more about the British royal family before the war, I still found “Miracle” an interesting read written in compelling prose.

I received this Advance Review Copy (ARC) novel from the publisher at no cost in exchange for an honest review
.
Find all my book reviews at:

When did Women’s Fiction morph into Romance Fiction?  Or is it just me who feels the shift?  Traditional women’s fiction focuses on a woman’s lifetime journey. There is frequently a love interest.  A romance novel focuses entirely on a woman’s romantic relationships and usually has a happy ending. This novel has two timelines: during and post WWII.   Our heroine has a romance going on in both—just not necessary.  One love interest is understandable. The survival of her child and herself depended on it. The other feels like an add-on simply to keep romance readers happy.

During the war, the woman has an eighteen-month-old baby. She works in a tiny bookstore in occupied Paris.  In the next decade, her daughter is a young teen and she works in a NYC publishing house. Although unhappy with the feel of a romance novel, there were parts of the story that I did enjoy. As a reader, I was delighted to find myself reading a book about books. I read to learn and to be entertained simultaneously, which is why historical fiction is my favorite genre. I applaud the author’s research. I did learn something new regarding WWII German soldiers. I cannot say more for it would be a spoiler. I thought she did a good job of showing the impossible choices the mother needed to make, during the war, to keep her child alive. As well as capturing the woman’s overwhelming sense of survivor’s guilt once she was safely living in the States.

Still, I do not think that “Paris” will pose any threat to other WWII historical fiction books.  In the classic, “Sophie’s Choice,” the good versus evil smacks you in the face. In this novel, it feels colorless. There are scenes showing the horrors committed against the Jews, but the brutalities are not as pronounced.  Your jaw will not drop from shock.  Possibly this was the author’s intention since the story revolves more around the main character’s personal journey than war crimes. The character Sophie also has a romance when she is out of Nazi Germany and is living in Brooklyn, NY.  Hers is a violent relationship, which she accepts due to her posttraumatic stress from the war years. Unlike this novel, that romance enhanced Sophie’s tale.

Maybe I was expecting too much. Ellen Feldman is a 2009 Guggenheim fellow, which lead me to believe I would be reading a literary novel.  The book held my interest for the author’s moral analysis of her characters. The mother struggles with what is right and wrong in both of her love affairs.  Her male characters are also wrestling with their consciousnesses.  Feldman creates further tension with her daughter. The mother never tells her teenage daughter secrets from their past causing a rift between them.  However, I am simply not a fan of contemporary romance.  If you are, and you enjoy historical fiction this one is for you. 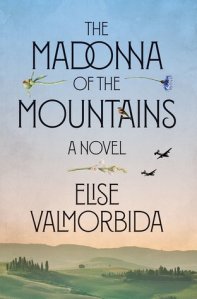 Whenever I give a book a five-star review, that means, for me, it is an incredible read.  I admit that when a book is on a subject I enjoy or something that I can relate to, I usually add in an extra star.  After all, this reviewer is only human.   In this book, I strongly identify with the characters’ culture.  Still, this does not take away from the vivid imagery in the superior writing.  You will feel as though you are inside the pages and everything is personally touching you.  The novel is filled with the feel of Italy, its food, its way of life and its picturesque wonders.   As well as the ugly underbelly of peasant living; the author, Elise Valmorbida, explores the moral questions on the uneven balance of power between the sexes in Italian life.

The novel derives much of its weight from its setting: War in Italy during the 1920s to the 1950s.  The main female protagonist is the epitome of an unsentimental woman doing whatever it takes to keep her family alive during hardship in unstable times.  She and her husband have lived through and survived WWI.  Now they must do it again, with four children, during WWII.  As the reader knows, at the beginning of the war, Benito Mussolini chose to ally Italy’s forces with those of Adolf Hitler.  Soon German and Italian armies were battling Allied troops on several fronts.  Italian civilians suffered on many levels. Their homes were bombed, their food sources cut off.  Then, one month after Italy surrendered to Allied forces; it declared war on Nazi Germany.   And, the Italian people were further bombed and starved and still suffering. “War is hell.” ― General William T. Sherman.

“Madonna” focuses on the female character’s role.  Women seemed the most burnt out by life because they were the most abused.  The enemy, whoever they might be at the moment, was beating and raping the females.  Their own husbands were often no better, especially in peasant life where it is the norm for men to beat their wives and children, and have affairs.  Think the movie “Zorba The Greek,” not an Italian film but so similar in the scene where the village peasants stone to death a woman who was unfaithful to her husband.   If you think this casual acceptance of violence against women can be attributed to the period, think again.  According to the National Center for Injury Prevention and Control, “women experience about 4.8 million intimate partner-related physical assaults and rapes every year.”   I actually found myself comparing our Italian mother to Tina Turner and her husband Ike.  Ike once told the newspapers in 1985. “Yeah, I hit her, but I didn’t hit her more than the average guy beats his wife.”  I have read much fiction and nonfiction on violence against women, this novel explains it so well.  The reader will observe how mothers taught their daughters that they must be subservient to men.  And if they are not, they will be physically punished.  Here is another movie for you, “Divorce Italian Style.”  The film is a comedy that still screams of a patriarchal society where it is expected that husbands and fathers hit.

All in all, as a reviewer, I appreciate that the author did not portray the mother in a romantic sense.  What she did was show wartime horrors and the abuse the women endured in an epic novel.   The author’s characters are so real and so gut-wrenching that I was not surprised to learn about the possibility that this is autobiographical.  I applaud Valmorbida for such an honest description of Italy’s wonders and shames.